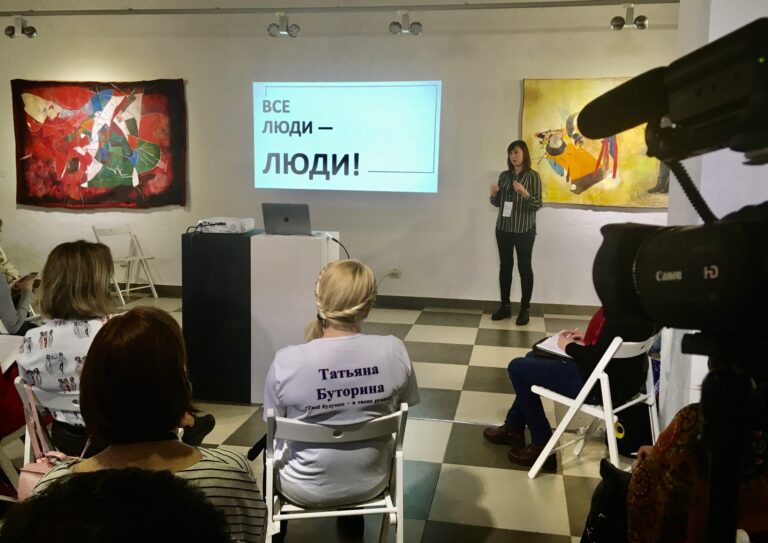 “Video content reigns on the media landscape. Visuals are a much faster track to arouse audiences, evoke response. While some see them as something self-evident, others need to re-adjust. I heard someone say a great thing, “You don't have to change if you don’t want to, survival is a voluntary matter." Our participants do understand how important it is for a cultural institution, be it a rural community center or a metropolitan venue, to be able to move with the time and stay up to date,” said Tamara Statikova, Arctic Open Director. Тамара Статикова.

According to the ranking conducted by PRO.Culture.RF of the online activity among the Russian cultural institutions in 31 regions with 1 to 2 million inhabitants, Arkhangelsk ranks the 27 th. To fix the situation, the workshop had on its agenda digital tools, content presentation techniques, event announcement writing, technicalities, and possibilities available from PRO.Culture.RF project.

“I hear cultural professionals say they can't update their pages or post stories because they have neither time nor designers to help them. We tried to help them out by providing templates where they only had to replace data in one layer, for the Museum Night event. It seems a shame to be still missing out on the opportunities to make oneself more visible,” says visiting speaker Oksana Kuchirka.

Alongside with online positioning techniques, the audience were encouraged to “conquer” platforms previously unexplored, such as Tik Tok, which are exactly the venues for museums, libraries and cultural centers to meet younger audiences and opinion leaders who might be a good resource to reach out to more audiences.

“The workshop has proved very useful for me. I represent a library in Novodvinsk and we are working to promote ourselves via social networks by creating groups and accounts. We will definitely be using the tools available,” said participant Olga Pavlovskaya.

“It’s been absolutely useful. And, more importantly, stimulating. The speakers sounded quite enthusiastic and inspiring. Though, practicalities such as starting a podcast should have been given more time, I think. As to the promotion part of it, I am going to use Pro.Cultura to post information. We did use it before the lockdown and it’s high time we use it again,” says Tatyana Khrycheva, librarian atJoseph Brodsky Central Library in Konosha.

Day two was marked by InFilm Studio director and producer Anatoly Konychev delivering a lecture about the nuances of broadcasting on the social networks.

“As a small cultural venue in a small city, I had but a vague notion of how we might be interesting to, say, audiences of Pro.Culture.RF. I didn't really know that what comes ordinary to us may be perceived by other areas as totally exciting. And I also learned that non-profits – and I’m involved in some – can benefit a lot from Pro.Culture.RF as well, even more than any other user category,” said Diana Stroganova, resident of Novodvinsk.

The message that the speakers were trying to get across to the audience was ‘have no fear and promote by using all the forms available’. We have posted the lectures on our Vkontakte page for all those who are interested.

The workshop was held at Borisov Museum of Artistic Exploration of the Arctic and, namely, its Cultural Innovation Center (CIC Arkhangelsk) – winner of “Support Social Innovation Centers” contest held as part of Vladimir Potanin Fund’s Functioning Philanthropy program and a member of Artistic Culture of the Russian North museum association. The event was supported by Arkhangelsk Ministry of Culture.

This week will see Arctic Open hosting one more event – Art Barrierless, a roundtable to discuss availability at cultural venues of services for visually impaired visitors. Its program includes a trial staging of a piece from Thunderstorm with audio descriptive commentaries.

The roundtable will be held on October 1-2 at NArFU Intellectual Center – Scientific Library. Participation is free.

We invite all media. Please let us know about your participation. The event will be held in compliance with Rospotrebnadzor prescriptions.